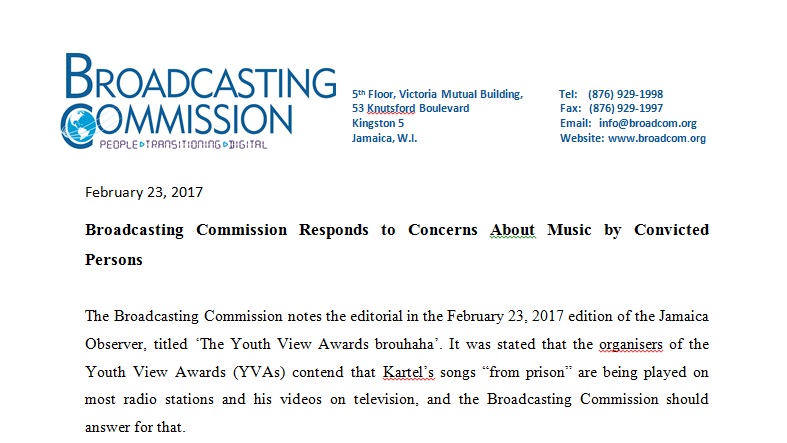 Broadcasting Commission Responds to Concerns About Music by Convicted Persons 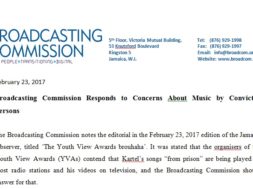 Broadcasting Commission Responds to Concerns About Music by Convicted Persons

The Broadcasting Commission notes the editorial in the February 23, 2017 edition of the Jamaica Observer, titled ‘The Youth View Awards brouhaha’. It was stated that the organisers of the Youth View Awards (YVAs) contend that Kartel’s songs “from prison” are being played on most radio stations and his videos on television, and the Broadcasting Commission should answer for that.

The Observer might recall that when Adidja Palmer was to be sentenced, the Judge had reportedly directed his mind to whether he would have been able to make music in prison and if the punishment should extend to his music catalogue. The court made no orders in relation to that matter, presumably because the appropriate authority would be the Department of Correctional Services.  To be clear, as it concerns convicts, their privilege or ability to create music whilst incarcerated is governed by correctional rules.

In July 2016, the Broadcasting Commission initiated a meeting with the Commissioner of Corrections and officials of the Ministry of National Security to discuss our concerns about anecdotal evidence that Adidja Palmer had been making recordings from prison. We were made to understand that the Department of Correctional Services was investigating the allegations and that no determination had been made on the matter. We also learnt that the prison rules were under review to deal specifically with that issue. The Broadcasting Commission was also advised that music creation is a part of the prison rehabilitation programme.  We have offered to assist the Correctional Services in crafting appropriate and effective rules and will continue our dialogue on this matter.

The question of whether prisoners should be allowed to create music in prison or have their works broadcast evokes public sensibilities and positions differ on it, sharply.

The question of whether prisoners should be allowed to create music in prison or have their works broadcast… Click To Tweet
The Broadcasting Commission shares public concerns that the airwaves should not be used in a manner which is celebratory of a person convicted of murder. However, there is no provision in law barring the transmission of music, simply because it was created by a convicted person. Only if it were proved that the music was created in contravention of a law governing the Correctional Services and a broadcaster knowingly facilitated that contravention, could there be a lawful determination that the broadcasting rules were breached.

As the editorial acknowledged, the issue is much broader than radio and television because we live in an age when many people, particularly youth, receive, create and share content on social media.

For our part, the Broadcasting Commission is responding in three ways. We are very focused on media and digital literacy, especially in schools. Over the past 5 years we have been engaging primary and high school aged children about the opportunities and challenges of the digital economy and society, how they should identify and manage harmful media content, managing their ‘digital selves’ and the continued relevance of values.  We have also recommended to government that it be written in the broadcasting law that each holder of a licence must have a central system which governs the receipt, evaluation and approval of music for broadcast, thereby removing the ability of individual disc jocks to decide what is played, without any reference to management. The public is also assured that this sensitive issue of the legal boundaries for treating with content made by convicted persons is on the radar of the newly appointed Commission, building on the initiative of the last Commission which ended its term in November 2016.

The Broadcasting Commission does not take public concerns about broadcast content lightly. We are taking note of the range of views that are being expressed, such as those in the editorial.  In the end, we will protect the right to freedom of expression whilst taking account of the realities of the age in which we live, our role as custodians of shared values and our responsibility to the youth who are trustees of posterity.