Many of us are not digital Natives. We are rooted in the age of sharpened pencils (tied to a string around your neck so you won’t lose it) and “cut book” (an exercise book cut in half so it would last twice as long). Back then a friend was a friend, someone you spent face to face time with everyday, someone you followed “part way” when it was time for them to go home, someone you fought with and made up with before the dust settled. You couldn’t ”unfriend” such a friend – you could only straight out “malice them”, or “cut yuh yeye” whenever they looked your way. But through thick or thin, the people you saw every day were your only friends. The closest we got to an international friend, was the occasional pen pal. Homework assignments were completed using the Encarta suite of encyclopedias – there were no “apps”. For us, ”non-natives”, technology at its most advanced, was a colored television set.

A lot has changed since those seemingly dark days. We now live in an increasingly digital world. It’s no surprise then, that children are more adept at using computers and mobile devices than their parents. It is as if they pop right out as tech-savvy little beings that put grown-ups to shame. This Child Month, the Commission hones in on these almost mystical creatures – digital natives- and how they interact in the digital realm.

A lot has changed since those seemingly dark days. We now live in an increasingly digital world. It’s no surprise then, that children are more adept at using computers and mobile devices than their parents. It is as if they pop right out as tech-savvy little beings that put grown-ups to shame. This Child Month, the Commission hones in on these almost mystical creatures – digital natives- and how they interact in the digital realm. 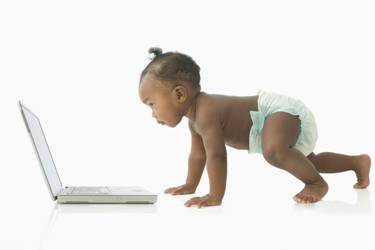 not just passive consumers of technology. They are also active content creators and technology innovators. Jamaican born Saadiq Rodger-King made international headlines after Hot Potato, a social networking site he had helped to found in a Brooklyn garage, was acquired in 2010 by Facebook for US$10 million plus shares. Harvard business student Grace Choi invented Mink, a 3D printer for makeup.This printer allows the user to recreate shades from any image on the internet and turn them into real, ready to use powdery makeup pigments. Did we mention that the printer uses FDA approved makeup ingredients? Well it does. Women all over the world will be able to safely produce their own makeup in any shade they desire without the hassle of searching for stores that have that rare shade they’ve always wanted, or paying hundreds of US dollars for a minute amount of makeup.

Digital technology is also helping to shape cities of the future. Companies such as Cisco and Siemens are adding robust information technology infrastructure to power smart-grid networks that will allocate electricity in response to demand, and public transport systems that respond to congestion by allocating buses where people are congregating or changing lights automatically based on traffic patterns. For those of us that have had to stand for over an hour waiting for a bus or have been stuck in traffic for several hours, this is certainly welcome news.

With such knowledge and power available to us, the advantages seem limitless. But as Uncle Ben cautioned in the movie “Spider-Man” – ”With great power comes great responsibility”. This brings us to the pitfalls that digital natives just might fall into. They might have an extensive knowledge of how the technology works but do they know how to properly manage their online selves?

For digital immigrants, embarrassing moments during our childhoods lasted only as long as someone’s memory. For a digital native, this is not the case, moments, good and bad are often recorded, uploaded and may be available for the world to see…forever.

Inappropriate posts could cost you your job, prevent you from getting hired or getting into the university of your choice. A study done by US Microsoft showed that over 70% of recruiters used information garnered from social sites to assess candidates suitability for a job, and over 70% of these recruiters rejected candidates based on their social account information and posts. A great example of this, is the tweet below by Justine Sacco, who of all things was a Public Relations Director, and as such, one would assume that she would be aware of the dangers of making certain comments on social networks. 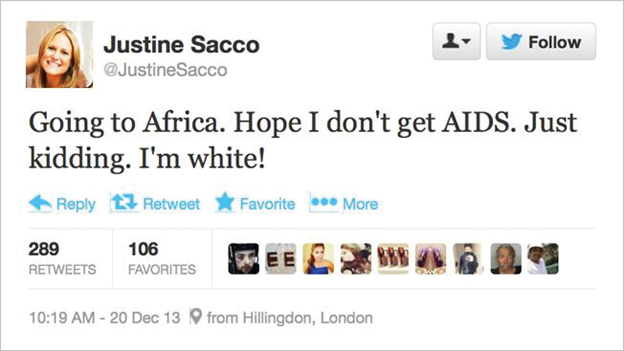 This tweet was made shortly before her 11 hour flight from London to South Africa and by the time she arrived in South Africa, her tweet had gone viral and she had lost her job due to the negative backlash that her tweet received.

But even when we are careful about what we post, there are still other dangers present online. In 2001, with the Code Red virus attacked many computers, including those at The White House, leaving personal and confidential information exposed to the public. In August 2012, twenty seven year old Jamaican computer hacker Ronald Oates was arrested and charged with hacking into the email accounts of hundreds of Jamaican females. Once he gained entry, it is alleged, Oates would troll through emails until he found nude photographs which he would then download and email to victims demanding between $10,000 and $20,000 not to publish them on the internet.

Digital natives are also prey to predators, who are even more dangerous online where they can’t seen, and as such, can assume numerous identities with which they use to lure teens into meeting them. In recent years several teenagers have been found dead after leaving to meet with friends they met online. The highly publicised deaths of American girls 15 year old Nichole Cable and 17 year old Ashleigh Hall are unfortunate examples of this.

Both digital natives and digital immigrants are susceptible to online dangers. We can decrease these risks by following these simple tips and encouraging our children to do the same:

Technology has permeated every aspect of our lives, but despite the widespread use of these devices both as educational and recreation tools, we can’t allow digital natives to live in a vacuum that includes only themseIves and devices. Children must be encouraged to play outside, interact face to face with their peers or participate in activities that do not involve digital technology. It is in their best interest that we help them to become well rounded individuals who can take advantage of the benefits of technology without being totally reliant on it for their well being, happiness and education.

What are your thoughts? Comment below and tell us – What do you think about the pace of recent technological innovation? How do you manage the young digital natives in your life?