The Future Is Digital

The Future Is Digital

“The future is digital” – simple, thought-provoking, true? With the pattern of expanding digitalization in industry over the past few decades, what kind of future are Jamaica and the world at large faced with? Where is technology headed? Based on the clear evidence presented in the current world situation, the answers to these questions need not be left to mere speculation. It is almost axiomatic that technology, over the past few decades has and will, in coming decades continue, to dominate life as we know it. However, the question is: How healthy is the current blitz of digitalization? Do the prospects threaten the industriousness, the activeness, the very awareness of man? Where do we draw the line? It is the unyielding view of this essayist that if left unharnessed, technology may very well result in Man’s detriment and to some extent, already has, but that there are remedial and preventative steps we can take to control this situation, while still enjoying the luxuries technology provides. 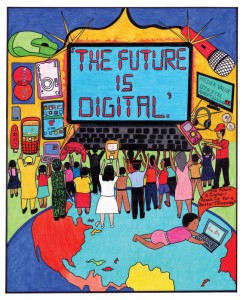 Before examining this weighty and controversial issue, it would be beneficial to define a few technological jargons. The word, ‘digital’ is the opposite of, ‘analogue.’ “An analogue system uses continuous signal that varies in amplitude to represent a variable, such as voice or data, rather than having a limited range of steps like a digital system,” states a popular self-help Internet site. According to Oxford’s Student’s Dictionary, ‘digital’ means, ‘representing data as a series of binary digits.’ It also means, ‘to do with or using fingers.’ From the foregoing then, the theme presented could be reworded, “The future is binary” or figuratively, “The future is at our fingertips.” There are other terms for which a definition might prove helpful. One such is ‘digitization,’ which is ‘the conversion of analogue information in any form (text, photographs, voice, etc.) to digital form with suitable electronic devices … so that the information can be processed, stored and transmitted through digital circuits, equipment and networks.’ A related term, which is similar but not synonymous, is ‘digitalization.’ Digitalization is defined by The Business Dictionary as the integration of digital technologies into everyday life, by the digitization of everything that can be digitized.’

The realization of the terms adumbrated above is evident in this age. What is evident is that the world is changing rapidly and constantly in the fields of industry, finance, government, business management, education and entertainment. Current with this onslaught of global reform, scientists, particularly technologists seem never to cease asking: How next will technology change the way people see the world? We can examine some practical ways in which this has been accomplished in recent years.

Technological expansion has affected specifically, the areas of socialization and entertainment. Social interaction is now literally below the digits of the populace. The power is in the keypad, be it that of a desktop, notebook computer or mobile device. Talk of the evolution of social networking sites is now exhaustive and it cannot be over-emphasized how little effort it takes to communicate with family and friends. Highly promoted is the idea that every activity in which one participates and every idea that crosses his mind is a little nugget of gold or a precious gem and that it would be almost sinful to keep it to oneself and hence, it must be “tweeted”, “Facebooked” or otherwise broadcasted. The fact that so little is required to become acquainted with or stay in contact with someone seems to somewhat rob the world of simple sentiment. In a world where all it takes is the click of a button to connect vaguely with another person and where time and space are no longer barriers to communication, much is taken for granted. Physical games and other interaction have been replaced with virtual games and social networking. People seem to have forgotten the value of a simple letter or a phone call, and even original e-mails are often only sent for business purposes or in cases of dire emergency. Cowardice, isolation and selfishness are being promoted more and more. People are often lonely, as seen by the fact that many, especially young ones, describe themselves as being surrounded by ‘friends’ and having no real friends.

Apart from isolating themselves with social networking, the populace of the 21st century also habitually detach themselves from real life, by ‘cooping themselves up in a corner’ conveniently between two earphones. Yes, music is another form of entertainment in which those of our generation tend to ‘lose themselves.’ With the auto-tuned voices of our modern day, another argument is that the majority of the so-called musical entertainment presented today also lacks a human touch. The modification of the human body in popular music videos, by means of Photoshop and other technology is a means by which the human figure is degraded, when it should be celebrated. The use of auto-tune to enhance human voices has been viewed by some as a mockery of human talent. So expansive is the use of this technology in the music industry that there are even genres of music, such as Electronica and Techno, which make little or no use of human instruments or the natural human voice. Rather, they use digitally fabricated polyphonic tunes and beats and extensively auto-tuned voices to produce music. How different from decades past!

Be not mistaken. The purpose of this essay is, in no way, to bash technology. This discourse would indeed be lop-sided and brutally unfair were the innumerable and remarkable benefits of digitalization not propounded. In a recent letter to the editor of The Jamaica Observer by one Clemente Ferrer, it was stated, “More and more, users are increasingly turning to digital technology to become informed.” He adds, “It is estimated that, for 2015, online ads will grow 25.6 per cent, while TV ads will be stalled at 40 per cent … This Internet increase could negatively affect traditional press, which will suffer a decrease in quotas from the 14.9 per cent of 2010 to 11.4 per cent within the next few years. ” This is clear, as most, if not all, newspaper companies and radio and television news stations have a website by means of which online audiences may be provided with quick, up-to-the-minute updates on topical issues locally and internationally. Students and businesspeople alike are in need of current and accurate information for school or work purposes, and they are allowed such access by means of digital media. As a point of fact, a large percentage of the quotes and facts used in this essay were accumulated through the use of the Internet and compiled by means of the popular digital typing software, Microsoft Word.

Nowadays, it is a rarity for an enterprise not to have a website, by which means clients can access information about the company. As far as most financial transactions, including bank deposits, loans and bill payments are concerned, it is not uncommon that advertisements of fiscal institutions never fail to mention that these liberties are “NOW AVAILABLE ON YOUR WEB-ENABLED PHONE.” This has and will continue to reform the hassle of waiting long hours in line at banks, payment offices and other places of business.

Another brilliantly conceived convenience brought on by the revolution of digitization is the recent implementation of what are known as “smart-meters.” These are electronic electricity meters which accurately record the rate of energy consumption of a household, similar to what was done by regular analogue meters prior to their introduction. These types of meters were recently introduced into our country by the Jamaica Public Service (JPS). Though they faced opposition from the government, largely due to the history of the Public Service and allegations that the meters were being unlawfully tampered with, there is no dispute that the employment of these new meters was a good idea, which the Opposition People’s National Party agreed with. It is the hope of this writer that subsequent to the finalization of disputes involving the Public Service, these smart meters will be successfully put in place for public use, as they will prove to be more accurate and will benefit the population.

What is clear from the information presented is that the world is highly digitalized and according to informed prediction, will continually be so for years to come. What is also evident is that there are pro’s and con’s to this revolution. The onus rests therefore on us, as human beings to control the use of this technology so that it does not control us. It is necessary that we encourage activeness and kindness in the global population, particularly in teens and young adults, who are the main target of digitalization. As we cannot hinder technological advancement, we must do our best to weed out the indolent, technologically-dependent, isolated and sedentary lifestyle, which has become so prevalent and promote exertion of the mind and body and harnessed use of technological equipment. It stands indisputable that the future indeed is digital. Yes, the future is digital and the future is now.

0
0   0
previous Payola: Pay for Play
next Cracking the Children’s Code for Programming